I saw my father he told me something
that I have to remember when I get stuck and ....
torpid!!!!!!!
:).
We were sitting in the breakfast room
as we called it
and I was about to come back here.
He simply said
you make your bed , you have to lie in it.
I had a dream the other night
about this very thing.
I always think that this last time that I was with him
was the last time, but I didn't know it
and somehow I think he did.
He and my mother were supposed to come and visit us after I had my first son,
but Daddy got sick and never made it.
When I talked to him after I got home from the hospital
he asked me how Johnathan was
I asked who is Jonathan
he said your son
that isn't his name was my reply
and
I never thought to ask why he said that name
I didn't know for years and years later that his fathers name was
Johnathan 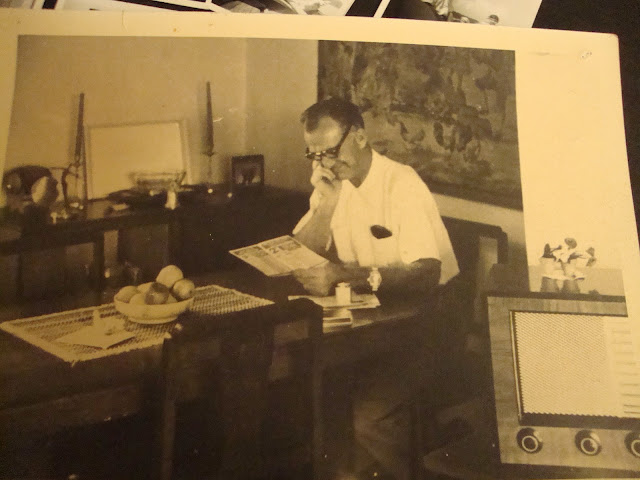 that is my grandsons name
because my son remembered me telling that story a time or two
My father had cancer and I wasn't there for any of it
but the very beginning when they were doing tests
but I never imagined then how long it would be
and how he must have suffered
he was "sick" for quite a while
and
I have a letter he wrote me right before he was supposed to have a
big operation
he speaks of making it through and soaring like an eagle
he made it through
but it didn't cure him
he died three weeks before they were to visit
and I wasn't there
My mother came a few weeks later
and met her first grandchild for the first time
my son was very ill
some stupid idiotic moron of a doctor had overdosed him
and we nearly lost him
so when my mother arrived
I was in a state and so was she
but as it does
it all worked out and she got to be a
grandmother to a little boy who adored her
she spent a lot of time with all of her grandchildren
three grand sons
and she was a good grandmother
even though her daughters didn't always think so
but the grandsons never got to meet
the man we so often told them about
the man with the very long name
that spelled his first name
JACK
Jack Albany Clarence  Kipling Barnes
and his surname
don't remember why the Barnes.....but the others were dukes and I think Rudyard, maybe!!
:) :) :)
!!!!
I have often fantasised about how it would have been if they had ever met
he would have been such a neat grandpa
he was funny and gentle
he was good with his hands
he had patience
and I know this because he had
three females in his life who were a hand full
we had some friends whose father had left them
and my Dad kind of became a surrogate dad to them
I used to wish that I could have heard him
call my boys
"son"
the way he used to call our friends that
I just wish my boys could have known him
and when things used to get hairy
having teenage boys about
I did tell them once in a while
that they had made their beds.......
wonder if they will tell their children that too
The reason I tell you this tale
is
I did make my bed
and I will lie in it
and I will remember that my father would expect me
to do the best I can do with what I have
and what I have is nothing to dismiss
or complain about
I have so much more than so many
so I will remember to be
grateful
....
that I didn't have to live in the desert
and have nothing to eat
but cheese and jam

"The destiny of nations lies far more in the hands of women, the mothers, than in the possessors of power, or those of innovators who for the most part do not understand themselves. We must cultivate women, who are the educators of the human race, else the new generation cannot accomplish its task."~ Friedrich Froebel

"Whoever said that nothing rhymes with orange clearly doesn't know the correct pronunciation of nothing."

"The more clearly we can focus our attention on the wonders and realities of the universe about us, the less taste we shall have for destruction" ~Rachel Carson

"Do not meddle in the affairs of dragons,
for you are crunchy and taste good with ketchup."

I am standing by the seashore.
A ship at my side spreads her white sails to the morning breeze
and starts for the blue ocean.
She is an object of beauty and strength,
and I stand and watch
until at last she hangs like a speck of white cloud
just where the sun and sky come down to mingle with each other.
Then someone at my side says, ‘There she goes!
Gone where? Gone from my sight – that is all.
She is just as large in mast and hull and spar
as she was when she left my side
and just as able to bear her load of living freight
to the places of destination.
Her diminished size is in me, not in her.
And just at the moment when someone at my side says,
‘There she goes! ‘ ,
there are other eyes watching her coming,
and other voices ready to take up the glad shout :
‘Here she comes!’
Henry Van Dyke, 19th century