Boring, so you may want to skip it...

I never intended this to become an almost daily report on the birds on the lake, or the cat in the house, but it seems to have become just that. I also didn't know that getting one comment on a post, would bring mixed feelings of delight and embarassment!  I read on other blogs that they greatly appreciate the comments and support they get and thought it was something they said..you know, just to keep the readers coming. But it's true. This here blog o'mine is just stuff and nonsense really.  I have nothing of any value to contribute, really I don't, but I like it now that I have started it. I find myself seeing things and thinking, hmmm, that's something I could post about. Actually "doing" the blog is a lot easier than I thought it would be, and I have actually learned a few things along this very short way. That is what I like, learning things.
Those of you who have said anything to me, off blog, so to speak!, have been very kind, and supportive, but if you know me, and I know you do, I tend to brush compliments off, because my self esteem is nonexistent and I don't think I can do anything that others can't do, better than me. Anyway,I am going to try and change the subject a teeny bit and maybe do more of what I do, rather than what I see....if that makes any sense whatsoever....(I have also discovered that I make a lot of these  ....  sorry, it's a habit and I'm not good at breaking habits). ... so back to what-ever the heck I was saying, oh yes, blogging about something other than the birds and the cat, "not that there's anything wrong with that".......who said that and in which TV show???


So, before you nod off and fall off your desk chair, or for those of you with laptops, off the couch, that's what I wanted to say. Less birds, more doing. Less cat, more showing. Maybe.

And a sincere thank you for being so kind.

The cat is not the only spoiled brat in the house. I am now working on what can be called "my very own computer". The resident geek squad, of one, installed a new system, the old one was a beta version and about to expire, so now I have a clean, fresh, whatever the heck it's called, hard drive, and a back up, a new system and hopefully he'll keep it going, because, like with a car, I know where to put the key and the gas, but what happens in between is a sweet mystery...... 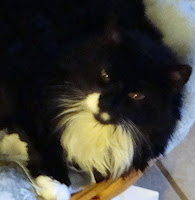 (and if I'm clever...it will remain that way)

"The destiny of nations lies far more in the hands of women, the mothers, than in the possessors of power, or those of innovators who for the most part do not understand themselves. We must cultivate women, who are the educators of the human race, else the new generation cannot accomplish its task."~ Friedrich Froebel

"Whoever said that nothing rhymes with orange clearly doesn't know the correct pronunciation of nothing."

"The more clearly we can focus our attention on the wonders and realities of the universe about us, the less taste we shall have for destruction" ~Rachel Carson

"Do not meddle in the affairs of dragons,
for you are crunchy and taste good with ketchup."

I am standing by the seashore.
A ship at my side spreads her white sails to the morning breeze
and starts for the blue ocean.
She is an object of beauty and strength,
and I stand and watch
until at last she hangs like a speck of white cloud
just where the sun and sky come down to mingle with each other.
Then someone at my side says, ‘There she goes!
Gone where? Gone from my sight – that is all.
She is just as large in mast and hull and spar
as she was when she left my side
and just as able to bear her load of living freight
to the places of destination.
Her diminished size is in me, not in her.
And just at the moment when someone at my side says,
‘There she goes! ‘ ,
there are other eyes watching her coming,
and other voices ready to take up the glad shout :
‘Here she comes!’
Henry Van Dyke, 19th century